“It was really fun. Every turn was different and I’m not lying, it really was perfect conditions. It was impeccable, it was perfect.” -Glen Plake

Will someone please tell Rémy Lécluse and Glen Plake how bad this pre-ski season sucks in Europe? These guys have clearly been left off the Negativeland email list or else they would have known better than to drive a couple hours south and pin a first descent (in November!) when they should have been hanging out in the bars whinging about not enough snow, or too many gorgeous autumn days, or the empty trails and rock routes, or the color of the sky, or pretty much anything, really. 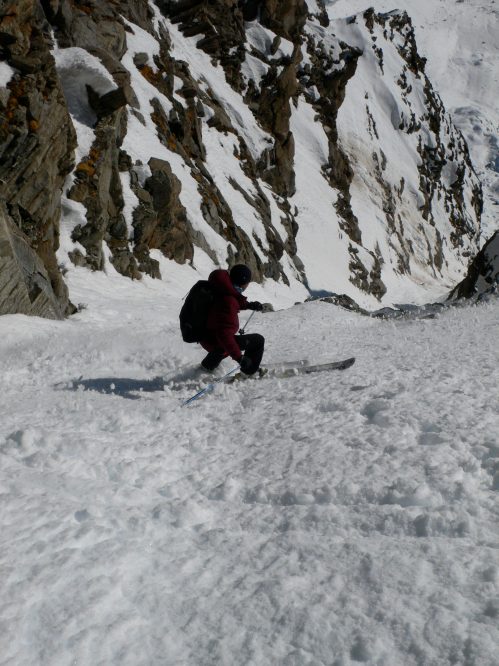 But these two have been around long enough to know that good snow ain’t that hard to find if you just know where to look. On November 19th the two big-mountain ballers tapped the pristine southeast couloir of 3777m Pointe de la Lune (Punta Ceresole) on the Cresta Gastaldi of Gran Paradiso.

Lécluse spotted the couloir while skiing in Val di Piantonetto. Believing that the strong foehn wind that had hammered Chamonix he contacted Plake who immediately said yes.

“People give me heck for being so enthusiastic about skiing but I think Rémy may have me beat. He’s always fired up to go do something on his skis. I mean I get excited but he’s like a little kid. It’s great to be around.” -Glen Plake

The team chose an alternative approach to the classic Val d’Orco route, choosing instead to go in through Val Piantonetto where the road goes to 1917m. “Less walking, more skiing is our motto!” 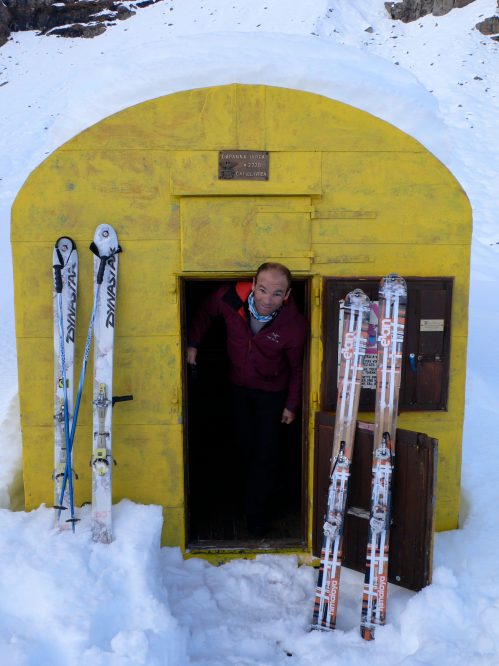 Rémy in the 60-year-old Bivacco Ivrea. "Sleeps 9 if they like each other very, very much."

Lécluse and Plake skinned up to Col del Becchi at 2989 meters, cutting trail through 20-30cm of powder before scoring nice powder turns down to the Bivacco Ivrea. “Powder, powder and more powder!”

The big powder field in the middle was around 30˚ and about 300 meters long. 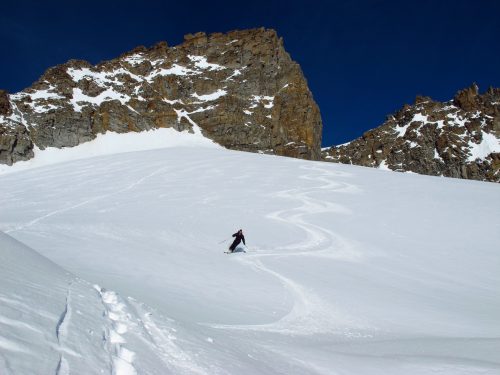 Plake in the middle powder field.

The team skied the route in about half an hour, which includes the time it took to shoot photos.

“The run wasn’t that steep, mostly around 40˚-45˚ with some sections around 50˚, maybe a bit more. The big slope above the cliff  was especially beautiful. That’s where we found that special ambiance that you only get from steep skiing.” -Rémy Lécluse

Some downclimbing was needed to get through the last chimney before scoring “an amazing powder skiing party” back to the Ivrea. An hour of skinning took them back to Col del Becchi before they tucked in to the icing on the cake: hundreds of powder turns between snow mushrooms in perfect powder, then a last 100 meters of breakable crust back to the Rifugio Pontese.

Two days, 2000 meters of powder skiing, and a sweet first descent. In November. Would somebody please tell these guys how bad the snow sucks!

Are we not men? Rémy Lécluse, Glen Plake

Posted in Are we not men?, AT skiing, guides, skiing

Man, just when you’d thought you’d seen it all, a vid like this hits your screen and raises the bar.

Mad, right? Read on to learn a bit more about the man between the canopy and the skis…

If you could change one thing in Chamonix: Obtenir plus de respect et de reconnaissance pour les saisonniers.

Last words: “Emancipate yourselves from the mental slavery

None but ourselves can free our minds.” –Bob Marley

To see more of Maël’s speed riding vids and base tuning techniques, check out his page on glaciers-climat.fr.

Posted in Are we not men?, cojones grandes, speed riding 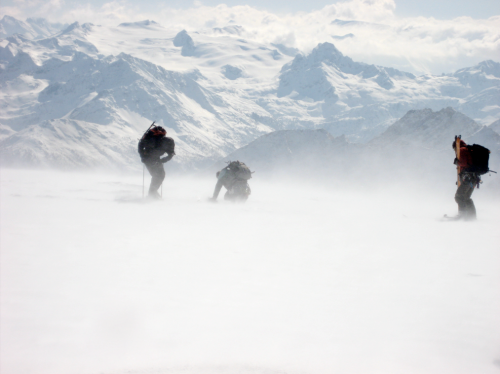 At least the sun's shining...

Man, some people will moan about anything. If there’s not enough snow, then there’s probably too much snow. For crying out loud, it’s only Movember! Shouldn’t we all be stoked out of our minds that the weather has been so good for so long?

And if you’re jonesing to ride, it ain’t that hard to find. Crew have been skiing untracked pow for the last few weekends within a couple of hours of Chamonix.

But for those who have been whinging about how the end of November has been looking a little too much like the end of September, fret not. Digital weather models indicate there is a cold front heading towards Europe.

In an article in today’s LeDauphine.com, noted Chamonix meteorologist Yann Giezendanner reports that digital models clearly indicate a low pressure system moving from Canada into the Atlantic. When it hits Europe, it will replace the ‘sweetness’ of the high-pressure system with which we have been blessed in the past weeks with precipitation, which means snow! There, you happy now?

And for the skeptics in the crowd, Giezendanner’s report is not simply ski station marketing tactics. His forecast is suported by Météo France’s own findings that anticipate a gradual deterioration of the blue skies and mild temperatures in the coming days. A Météo France forecaster told LeDauphine.com that we are moving towards a disturbance by the end of November and early December with “fortes chutes de neige pour lundi et mardi prochains”. Yessaiii!

MétéoNews Suisse also predicts cooler temperatures this weekend. The report goes on to say that the ‘confidence index’ for this forecast is high – level 4 on a scale of 5 – with French, European and U.S. models all showing the same data.

So while it’s still too early to say whether this season will beat the blower season of 1999/200, Mr Giezendanner assures us there should be enough snow to keep smiles on most people’s faces. At least until they start complaining about how they wish it would stop snowing and the sun would come out – waaaaaaahhhh.

“The worst climb-to-ski ratio I have ever done in my whole life.” -Andreas Fransson

OK, watching this video makes me feel a little better about the lack of snow in Chamonix. I mean hey, at least we’ve got great climbing weather and no blowing sand.

But despite the sandstorm and ghetto snow conditions, we’ve got to throw horns out to Andreas for climbing and skiing “6500-whatever-meter” Sajama, Bolivia’s highest Peak.

So much for the summit dance...

And as far as adventures go, this is exactly what it’s all about: discovering new places, interacting with different cultures, learning a language, traveling with the locals (70+ hour bus ride!), seeing and trying new things. With all this as part of the package you don’t need perfect snow to make it all worth it. Keep charging, boys!

How to Find Fresh Tracks in Chamonix 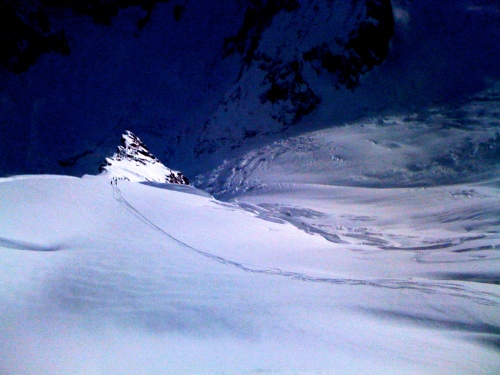 There are an overabundance of reasons to love Chamonix but day-after-day of skiing virgin untracked powder just ain’t one of ’em. Finding fresh tracks, regardless of how early you get out of bed or how long you stand in the rain waiting for the Grands Montets to open the damn door can be incredibly frustrating.

Fortunately for you, young slayer, your difficulties are over because I’m here to give you insider beta on where to find fresh tracks all winter long, regardless of how long it’s been since the last snowfall. But like any good secret stash it’s going to take some hiking. So gear up and take the high street up valley past the post office, past Super U and when you get to Bistrot des Sports turn left and voila! Fresh Tracks – whoop!

Yep, seems your fav-o-rite freeride shop, Otavalo, have put their heads together with the good crew over at K2 to bring us the answer to every big mountain rider’s dreams … Fresh Tracks.

And while Fresh Tracks in this case might not mean you’re nipple-deep in cold smoke, it does have everything you’ll need once you find yourself there. As in a rock solid selection of shred ready gear including, but not limited to, the full range of K2 Sports’ most hardcore brands.

“We already carried K2 and there was so much demand for it that it only seemed natural to bring something new, a K2 pro shop, to Chamonix.

And as for you pinheads, there’s no need to get your wooly underpants in a bunch because Fresh Tracks will remain the epicenter of telemarking for Chamonix and beyond.

“There are several things that have come together to make it happen: we’re the only dedicated telemark shop between Grenoble and Switzerland; K2 is a brand that has always supported telemarking; and there are loads of passionate freeheelers who love Chamonix. So this new partnership gives us the opportunity to really step up the telemark side of the shop. In addition to K2 and Line skis, we’ll also carry Scarpa boots, Garmont boots, and G3 and Rottefella bindings. We’ll not only have tele skis for test but we’re also still the only store in Chamonix that rents telemark skis and boots.”

Joining Manu and Jeremy at Fresh Tracks will be Snell’s Thomas Aubin who will bring his four years of custom boot fitting to the store, and Julian Vessaire who will also be on hand a few days  a week to lend his extensive knowledge and expertise.

And for those of us who enjoyed hanging out downstairs in the Otavalo workshop, the lurking will now be even better. Jeremy told us,

“We’re re-modeling the workshop to make it more of a lounge with couches and music. It will be an even better place for everybody to come and chill out, talk about riding and find out where to find fresh tracks – haha!”

Head for the blue pin to find Fresh Tracks. (click to enlarge)

Chamonix Insider
Create a free website or blog at WordPress.com.